Recently a couple of things happened that gave me insight on how we fail. We were discussing how one of my friends was going to participate in an upcoming art event by submitting his photographs. Although he is extremely talented, enjoys this activity, and has many years of experience, when someone asked if he was a photographer, he casually replied that he was not, and only did it as a hobby. Several people there who know his talents forced him to say out loud that he was indeed, a photographer.

Then at lunch with friends, one of them mentioned she just started a podcast. Almost immediately she said it was just a “crazy idea”. We corrected her and insisted it wasn’t crazy at all and praised her for being courageous. We also told her about how we thought her eloquence made podcasting the perfect vehicle for her to express her ideas.

My friends are not the only ones who have a hard time doing something creative and then tentatively putting it out there. I tremble every time I am about to click the PUBLISH button on my blog site, and on several occasions, I have referred to it as a “baby blog”!!! Most of us suffer from fear of being judged or criticized, so we protect ourselves by stating it’s just a “hobby”, or a “crazy idea”, etc. That way if we don’t succeed (whatever definition of success we have in our mind), we can always go back to the safety of our practice space.

So, at what point do we give ourselves permission to leave our safety zone and enter the real world? When do we consider ourselves photographers, podcasters, bloggers, artists? Is it after many years of practice and experience? Perhaps after having the right education or certification? Does that make us now official creators or subject matter experts? I propose that we will never be experts, and that is just fine.

We should allow ourselves to fail. The first time will be no doubt devastating. It will sting a bit less the second time. By the third time, we may have a scar which will protect us from further damage. Then eventually we will realize that there is no such thing as failure (or success for that matter), but just a continuous process of growth. Allowing others to see a buried part of ourselves is the only way we will find our true inner voice, which may have been hiding for long time, even from ourselves.

To find your voice, look at how you like to communicate with others AND how well you do it. Both factors must be there. You can speak to many or few, write, paint, sing, dance, etc. We are very fortunate to live in a place and time where there are multiple ways to transmit your message. Then look for support group to learn from, and eventually teach to. And finally, don’t give up. You can stop to catch your breath, but then keep going. You may not see the fruits of your labor immediately or when you desire, but they will come.

In encouraging my friends to go for their dreams, I realized that I had stopped writing my blog. Their example inspired me to get out of my writing hiatus. Sometimes you feel you’re the only one who feels pressure to step out of your comfort zone. Having these moments of sharing our fears was a great lesson. We should all go out there and work on our own crazy ideas. In the process we will learn about ourselves and we may even push those around us to move forward. I’ll go first. I am a Blogger!

“Vulnerability is the birthplace of innovation, creativity and change.” ~ Brené Brown

This past Friday was the end of summer vacation for schools, and indirectly, for some business, including where I work. Technically, summer ends on September 23rd, but for the sake of this post, it ended this Friday. So in order to celebrate the end of this season, a group of coworkers got together in someone’s apartment, in a quiet little neighborhood of South Miami. My coworker had invited to the gathering one of her neighbors, an 84 year old former university mathematics professor, who lives a few doors down from her. He lives by himself, with 24/7 help from a private nurse, so she thought attending the gathering would brighten his day.

We had a great time talking with the Professor about how he ended up teaching in Miami, and he shared his life story and some anecdotes, including how he did not like any of the official textbooks the university had decided to use. From his own notes accumulated over many years of teaching, he created his own textbook, gave it to the students in pdf form, and told them to print and bind it themselves. What a novel idea! After a couple of hours, the Professor excused himself and returned to his apartment, extremely tired from the interaction, but (visibly) extremely happy. Afterwards, we returned to the usual talk about work, music, sports and favorite TV shows, which is what usually happens in these coworker encounters. However, after some time, we all commented on how talking with the Professor had made us think about our own futures.

Slowly, we started sharing personal details, which is something we had never done before! Someone mentioned how her parents moved to Miami in order to provide more attention to her during her school years, instead of sending her to boarding school, like they had done with her older siblings, and how that made her see parenting in a particular way. Then someone else talked about how she and her mother had a difficult time understanding each other because of having similar personalities, and how those years influenced the raising of her own daughter years later. I shared my own experience of my parents sending me to the USA alone when I was 13, and how that shaped my behavior later on. The level of our conversation increased from mundane topics to deeply personal ones. We were still coworkers by the end of the evening, but by openly talking about our experiences and ideas, we had become much closer.

I believe after talking to the Professor and seeing how his life turned out, not good or bad, just the fact that it did, we noticed that life is not only really short, but filled with stuff that at the time seems really critical, (and some definitely is), but it really won’t matter once we arrive at our later years. Although nobody wants to really think or talk about those years, they are coming regardless (if we are fortunate). We may as well use our precious time to fill our life-force tank with people and experiences we enjoy, and live without regrets. Let’s evaluate our schedules and see what “priorities” we can remove from there, and instead fill those slots with opportunities to connect and share with the people close to us, or even those we are not close to, but can become friends later on. The end of summer is the end of another season in our lives, and one in which we should strive to achieve deeper connections. 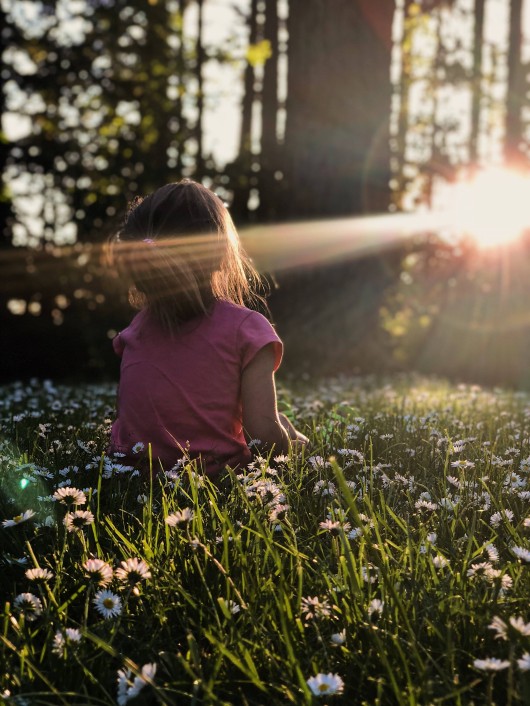 Photo by Melissa Askew on Unsplash

“We hold these truths to be self-evident, that all men are created equal, that they are endowed by their creator with certain unalienable rights, that among these are life, liberty and the pursuit of happiness.”

~Declaration of Independence of the United States of America – July 4, 1776

I went to see a therapist as a last resort. I was going through the most difficult time in my life, a separation after a 9-year marriage, and my sweet sister suggested this professional counselor, who came highly recommended. I finally went, had nothing to lose anymore, and maybe, just maybe, it would help. In one of the sessions, he told me something I will never forget. He said “give yourself permission to do such and such”. I jumped up and said “what do you mean, give myself permission!?”

The painful situation that I was going through and that I had been confiding in him had not happened because I decided or did not decide to do something. It was out of my control and it was caused by other people and or external forces or situations. But he told me in his wisdom, after all he had seen hundreds if not thousands of cases, that people have certain behavioral patterns in reaching decisions. We feel obligated to act in a particular way or take on a role in life because of what we learned as children from our parents or those who raised us. Then we use techniques which helped us survive when young, based on our personalities and values, and keep doing them as adults.

He said I could stop doing things I did not want to do. Give myself permission to say no to a situation I did not want to do. Or to pursue something I wanted to do. Ever since that day, I started to become the director of my life. I know we all think we do that already, but before deciding to do something, do you stop and think how your actions will be perceived by others? What will they think of me now? How will it affect them? I really don’t know what other people think, people are funny that way, but I like to believe they are too busy collaborating with others on their own mind stories. Of course life has compromises, that’s what makes it interesting. But you should not self sabotage your life.

Now if I think I should do something out of obligation only, I do not. If I had a tough day and I have not finished all activities on my “to-do-list”, I take the evening off and relax, guilt free. Or if I am hesitant to do something out of fear, I tell myself do it “to the best of my abilities.” Basically I removed the pressure to be perfect or not do it at all mentality that I had when younger. Because of a single comment heard many years ago, I have given myself permission to find those activities that light up my life, and stop those that take away the fire. So on this day where we celebrate freedom as a nation, I urge you to write your personal Declaration of Independence as a person, and declare that from now on, you are free from those mind blocks that have been with you during your whole life. Starting now, go and pursue your happiness! 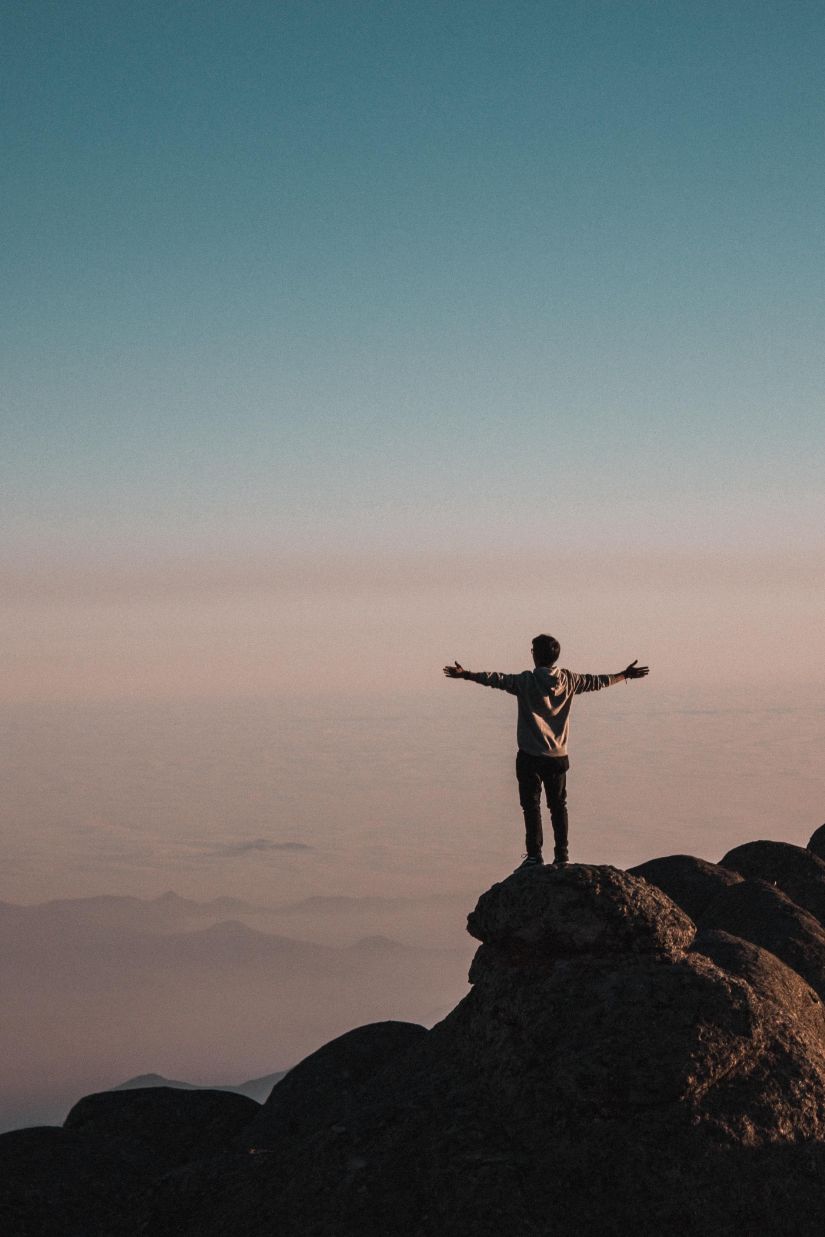 Photo by Junior Moran on Unsplash